The US beef herd size periodically cycles through expansion and contraction with about a10 year cycle. this cycle is largely which take time to build due to the biology of cattle. The low point of the current beef cycle was 2014, following droughts in 2011 and 2012 along with high feed prices in 2013, led to large cattle herd reductions.

These indicators will eventually mean fewer feedlot placements but that is not yet the case. USDA shows on 1 January that cattle on feed were 2% more than 1 year ago. In December 2019 feedlots placed 3% more cattle than 1 year ago and marketed 5 % more animals than 1 year earlier. Total cattle on feed is up 2% but the heifers on feed increased by 4%. This is another indicator that calf numbers will continue to decline and eventually rise. However one analyst suggests that 2020 prices are likely to remain close to 2019’s.

Yesterday USDA released the most recent first half 2018 price and production forecast for meat, milk and eggs. The summary of the projections is in Figure 1 below. USDA is generally projecting increased meat, milk and egg production for first half 2018. Only lamb production is projected lower due to a smaller 2017 sheep flock in the US. While higher production of livestock and livestock products leads to likely lower prices, USDA is projecting a steep rise in egg prices during early 2018 compared to 2017.

Egg prices have been influenced by larger egg exports, up 15% during October. Most of the growth has been to Asia. USDA points out that egg prices have reached the highest level since the 2015 and the avian influenza aftermath. US 2017 per capita intake of egg and egg products, termed disappearance, is 7% higher than the 2010-14 average (Figure 2). The 2015 avian influenza reduced egg production and profit margins encouraged more egg production during 2016 which then reduced profits from low egg prices (Figure 3). The low egg prices may have encouraged market demand.

Dairy product prices are likely to decline during the first 6 months of 2018 due to increasing stocks of some milk products as well as reduced domestic use of dairy products occurs. Use of all milk products on a milk fat basis is up only 0.6 year over year (YOY) but is -0.3% on a skim solids basis YOY. The most recent Penn State University Dairy Outlook points out the large European (EU) dairy supplies as one of the bearish factors in future milk prices. The EU is the largest exporter of milk powder. Last year the EU sold 50% more milk power than the US. Cropp and Stephenson from the University of Wisconsin pointed out last month that both the EU and New Zealand are having stronger milk production years. These two will compete with the US for dairy export markets. USDA is projecting 2018 Class III milk prices between $15.30 and $16.10. With declining Midwest milk premiums, basis, milk prices in the region are likely be more like 2015 than the past year (Figure 4).

There is much more in the 18 Dec 2017 USDA outlook. I have only hit some of the highlights. 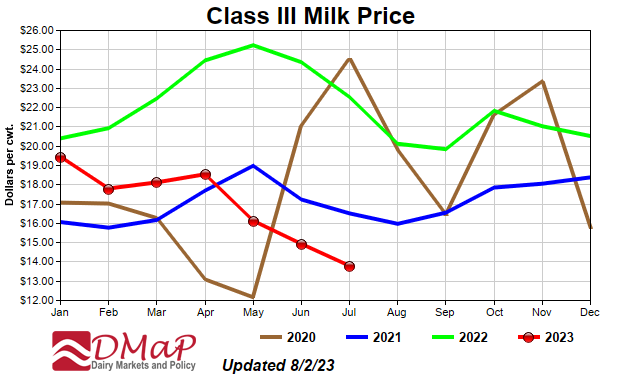 How will you know how much protein and energy your cows will get when you start feeding your hay and silage?  Or how much supplement to feed?  Find out by following instructions for sampling and testing.

Correct sampling techniques, followed by lab tests of forage quality, are necessary for cattle producers who want to get the most value from their forages and profit from their animals.

Maybe the most important step in sampling hay, and sometimes the most difficult step, is deciding which bales and stacks should be included in each sample.  Ideally, each sample should include only bales that were produced under nearly identical conditions.

Obviously, the place to start grouping is to separate different types of hay, like alfalfa or CRP or corn stalk or meadow hay.  But each cutting of hay probably is different from the other cuttings also, so there is another separation.  And no two fields or meadows are ever exactly the same, especially if they were cut more than two days apart, so that makes another grouping.  And what if part of the field was rained on before it was baled?  The hay made without rain damage probably will be different from hay with rain damage.

After you’ve made all these separations, which could result in quite a few groups of similar bales, then and only then are you ready to sample.  From each group gather a dozen or more cores from different bales or stacks and combine them into one sample.  Be sure to use a good hay probe that can core into at least one foot of the bale.

Finally, send these samples to a certified lab for tests of energy content and protein, maybe nitrates, and any other nutrients of interest to you.

Then use this information to feed your cattle as profitably as possible.

One widely adopted hay making technology is the round bale. In 1892 the first stationary round baler was built and Allis Chalmers building the first moving round baler with a pickup in 1947. Two other types of baler followed in 1970 and 1972. The first was a ground rolled bale but the 1972 baler built by Vermeer had a bale chamber and a pickup in front. Many companies followed so that 15 or so were selling round balers by 1975. Round bales are convenient for hay making, feeding, transport and storage. But there are some limitations farmers and ranchers must be aware of. Round bales stored and fed outside can have as much as 50% loss. But if stored and fed inside that loss can be as low as 5-15%. Let’s take a look at the worst case example to illustrate just how costly high hay losses can be.

The next question then becomes where on this typical ranch the losses are occurring. Recommendations for storage loss reduction are in a Beef website article: http://beef.unl.edu/minimizing-storage-and-feeding-losses-round-bale-hay which shows where the losses occur and how to reduce them in storage. Another publication for the University of Missouri discusses ways to reduce feeding losses: http://extension.missouri.edu/p/G4570. These are good resources to utilize when looking for the hay losses on a ranch but when implementing those strategies calculate the cost of implementation. If the implementation costs are more than reduced feed costs, implementing those strategies would make the ranch worse off financially.